What do you think is the most-used reporting tool in the world?  There are a lot of them available, at times it can be hard to move without running into a new Business Intelligence (BI) tool, but I'm going to hazard a guess with a high degree of confidence that the most used tool is still Excel.

Excel may not be where the data originated from and there may well have been a database involved to crunch numbers and aggregate to the point that the data would fit comfortably in Excel, but I do believe that it's still the most widely used tool for final 'analysis' and presentation of data.

This is not because Excel is the best tool for the job as almost every feature of Excel is handled better by another tool.  Joining separate tables of data with Lookup functions is a very pale shadow of using a properly defined database and the SQL language.  There are substantially better graphics, charting and visualization tools available.  The analysis tools (Correlation, Regression, ANOVA, Linear-programming) are the poor relation to more industrial strength packages.

I worked recently with a Demand Signal Repository (DSR) that is used to analyse and report on 3 Terabytes of Point of Sale data.   (FYI - 3TB is equivalent to around 6 million average sized spreadsheets).  The data is held and crunched in Microsoft's SQL Server database using a highly unusual (but very effective) data structure combined with a application specific querying engine that rapidly dumps out the data you need for reporting into ... Excel!   Once in Excel I have routinely turned to pivot-tables for 90% of the reporting.


Pivot-tables are not perfect, they have a number of foibles, but, there are 2 things that pivot-tables absolutely will not do that cause me the most problems:
There is not much I can do about the first one other than be aware of it,  await a better though probably much more complicated tool and warn others . (I''ve just checked that off my list)

The graphical display issue  I can do something about.  The main problem is this: once I get a pivot-chart set up as I need it for one group of products or locations, then to see the next group I must select it from a  Page Field filter. Look at the example below. (The Page Field filter is in cell B1).  I've built a pivot-chart on top of the pivot-table (not one of my best, this was just for testing), embellished it with a few formulas that update with the pivot-table and formatted the 2 into one area that should print well. 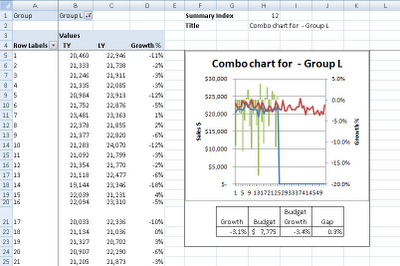 If there are 10 of these groups I must change the filter 10 times to see them all.  If I want to compare and contrast between them I must flip-flop back and forth or print them all, one to a page.  Not very satisfactory and severely limiting for reports that people expect to just print.

What I've wanted for some time now (and finally built) was an add-in that would take care of this.   An Excel add-in:
The original example now looks more like this and, in Excel, its ready to print, sized just right for the paper-size (letter) and orientation (landscape) I selected. 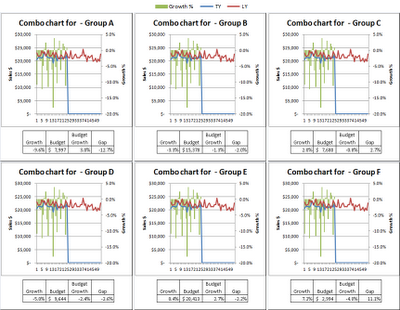 Refresh the Pivot-table with new data and with 1 click of the mouse (or 1 line of code in a subroutine if you prefer to automate) and it will rebuild adding or removing copies of the template as required to fit the data that's now there.

We've actually added rather more functionality to this that I originally planned, the full feature list is shown below:
This tool will be released soon as a free add-in that you can download from (www.crabtreeanalytics.com).  For the next few weeks, it's going through beta testing .

Here are a few more examples of the output: