Routine, weekly point-of-sale reports tend to look very similar.  For various time buckets (Last week, last 4 weeks, year to date) we total sales in both currency and units then compare to prior year.  Add in a few more measures to look at retail pricing, inventory,  or service level metrics and you may struggle to make it fit on a page.   And from a CPG standpoint, POS  reporting is only half of the story: a CPG's sales targets are not based on POS, they are based on shipments to the retailer.  How can you get a good overview of POS and reconcile that with Shipments all in one report?

It's not pretty is it? It's quite hard to pull useful summary data from.and we haven't even tried to include CPG shipment data yet.

To improve on this we're going to use an accounting approach called "Variance Analysis" and tweak it to fit our needs.  Variance analysis looks at revenue or cost differences and splits it  into components driven by  volume and pricing.   Typically this is used for comparison of budget or plan to actual but we'll use it to compare year on year sales.


The calculations are fairly simple but if you would rather avoid 7th grade algebra, just trust me and skip ahead.

Add these together  to get a Total Variance.  Now let's prove this really does explain the difference between Current and Previous Sales

Expand the terms (using introductory algebra) and we get:

As you can see, the 2nd and 3rd terms "cancel out" leaving us with:

Which is the exactly difference in Sales Revenue we wanted to explain.   Finally, express Total, Price and Volume Variances as a % of the same denominator (Last year's POS revenue) to get percentage values that are additive like this :

Let's make it a little more useful and split the volume variance into 2 parts:  for variance driven by changing distribution (the number of stores we sell through) and one for the rate of sale in each store.

Add these two variances together, multiply out the terms then simplify the result and you should get back to the formula we specified for the volume variance previously.

We can represent these results graphically as a waterfall chart. 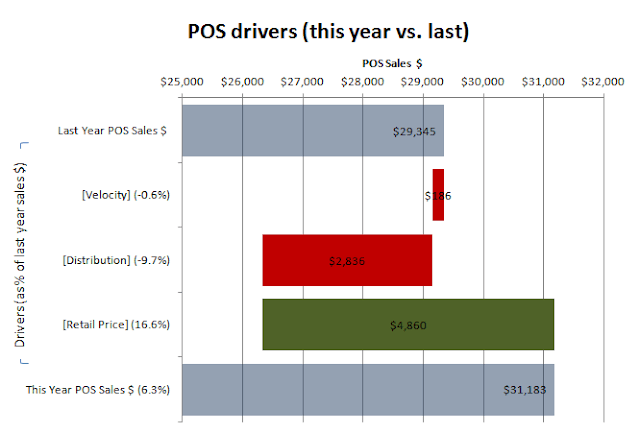 Starting at the top, this chart shows Last years POS Sales and then each additional bar shows incremental changes that explain the gap between last year's and this year's POS Sales.  Red bars are for negative values, green bars positive.

Now comes the challenge of connecting these two sets of variances :

To do this, we are going to split the Volume driver for shipments into 2 parts:
Calculation is simple: the first term is just the POS volume, the second the difference between shipment volume and POS volume for the period.


Note: In reality, we may need to make some allowances for other sources of consumption (theft, damage, loss) or procurement (returns, diverting) but we'll ignore these for now.

Here is the result graphically.  I have laid it out in exactly the same way as the POS Sales Variance Analysis. At the top level it does not look too bad, a year on year loss of 1.7%.  In reality this is the result of:
We could take this further of course and split the POS Volume component into two parts: one driven by velocity changes and one by distribution.  My preference would be to display these 2 charts side by side for each division,  category or brand using XLReportGrids.

I think this is a big improvement but it's still Analytics-Lite.  We have a much clearer idea of WHAT happened but leave it to the reader to add WHY it happened.   Predictive Analytics can help us get much further down that path.

This should make preparing for those weekly or monthly sales meetings go a little easier :-)  Of course if your numbers aren't meeting plan, you're on your own !