In my recent post on The right tools (structured) BIG DATA handling, I looked at using AWS Redshift to generate summaries from a large fact table and compared it to previous benchmark results using a columnar database on a fast, SSD drive.

RedShift performed very well indeed, especially so as the number of facts returned by the queries increased.  In this initial testing I was aggregating the entire fact table to get comparable tests to the previous benchmark, but that's typically not how a reporting (or analytic) system would access the data.  In this follow-up post then, let's look at how Redshift performs when we want to aggregate across particular records.

For this test, I am using the same database as before (simulated Point of Sale data at item-store-week level with item, store and calendar master tables) on 4 'dw1.xlarge' AWS nodes. For each query I am summarizing 5 facts from the main fact table, joining to each of the master tables and using a variety of filters to restrict the records I want to aggregate over.

The first record shows performance when we have no filters at all, summarizing all data in the fact table.  That's 416 million records in just over 30 seconds with an average speed of 13.4 million records per second.  Very respectable !

The second row uses a filter - WHERE category = 'Type 2' - based on a field in the item master table, which is associated with roughly 20% of the  fact table records.  Aggregating 83 million records in 26 seconds is almost as slow as aggregating across all records.  Not good.

The third row filters on a field from the Calendar master table to return only those weeks in the year 2011:  50 million records in 2.9 seconds.  This is quick and in speed terms, faster at 18.4 million records/second than the original query.

This apparently odd behavior is driven by my choices when defining the table for distkey and sortkey (see the SQL below) . 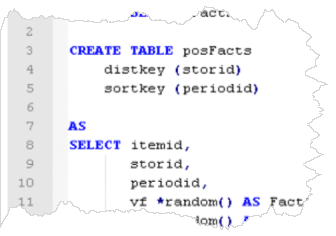 Note that Redshift doesn't use indexes or partitions as I am used to seeing them in relational databases so, in many ways, table definition is a lot simpler.  Remember that Redshift is running on a cluster of processing nodes, not just one machine.

distkey defines how the data in this fact table should be spread across the multiple nodes in the cluster.  In this instance I chose to spread it out based on the store identifier (storeid).  Redshift will try to put records with the same storid on the same node.  (More details om selecting a distkey here).  Note that this would primarily help with faster joins.  I did not add the same distkey to the store master table, but as that is small, just a few hundred records, copying it between nodes to make a join should not be especially impactful.

sortkey defines how records will be sorted on each node.  Redshift uses this information to optimize query plans and will (hopefully) skip past entire sections of data that are not within the filter.  I could have used multiple fields in the sortkey but chose to get started with just 1, the week identifier in the fact table and associated calendar master table,  periodid . (More details on selecting a sortkey here)

So with this in mind let's look at the results table again.

I don't think I'm benefiting from the distkey at all in this test set as I set the distkey to be storeid and none of these filters are store-based.  The filters are either based on time (the sortkey) or category, an item attribute which is not part of either sortkey or distkey.  And yet, the speed difference between row 2 (which presumably sees no benefit from either setting) and row 3 (enhanced just by the sortkey) is dramatic: almost a 6-fold speed increase!

That speed drops for the 4th and 5th records is, I think, more to do with some latency in query execution, rather like we saw in the previous tests.  These queries hit significantly less data and as the data quantity falls any latency becomes an increasingly large proportion of the whole.

I did not put a lot of thought into choosing distkey and sortkey values for this test but it certainly seems as though choosing these correctly could have a dramatic impact to the speed of queries.  Truthfully, there isn't very much to tweak here, so optimizing within these boundaries should not take too long.  I could really grow to like simple.